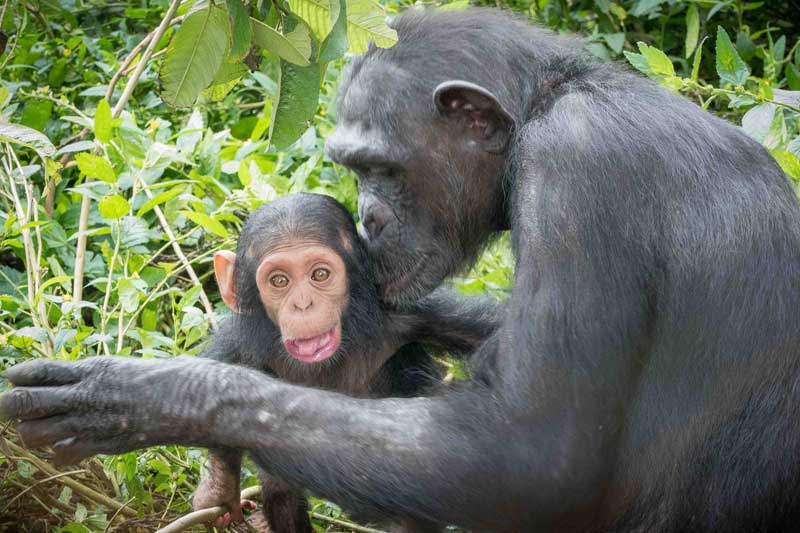 In September, last year, we started partnering with a charity called Ape Action Africa to donate unwanted bras to them.  A lot of our lovely customers still ask where they can donate their bras so here’s a recap.

We first met Rachel Hogan from Ape Action Africa (based in Cameroon) in 2015 when she came in to the Boutique. She told us about Meirelle, who worked in the Charity’s kitchens – a young mother in her twenties who had undergone a mastectomy which was paid for by the Charity.  As you can imagine, medical care is non-existent in the jungle!  Following her mastectomy, she was trying to compensate for her lack of breast by using old tea towels and leaves from the jungle stuffed down her dress. After hearing Meirelle’s plight, we were more than happy to donate one of our pocketed bras and a prosthesis to her.

The effect on doing such a small gesture has been incredible.  Meirelle couldn’t believe it when she was presented with a bra and prosthesis, especially one which was pocketed and now walks proudly around without having to worry about her appearance.  We received a lovely thank you letter and photograph from Meirelle and in fact, she’s become a bit of a celebrity!

We spoke to Rachel about other women in Cameroon that may need help. She advised us that women there don’t have access to underwear, they don’t even have access to sanitary towels. Can you imagine that?

We are proud to say that since partnering with Ape Action Africa we have provided the women of Cameroon with literally hundreds of your bras.  Rachel comes back to the UK every 6 months or so and we send her off with boxes of bras.  When they receive them in Cameroon, the women in the village have a party with food and dancing to celebrate them arriving!

Thank you all for your kindness, you are all really fab!

If you want to find out more about the Charity and the work they do, have a look at www.apeactionafrica.org.  We did and we ended up adopting a lovely chimp called Chris!

PrevPreviousKaren’s Marathon Effort is Well Supported by Embrace!
NextEveden Fitting DayNext
Close Menu
×
We use cookies for various purposes including analytics and site improvement. By continuing to use the service, you agree to our use of cookies. - Cookie Policy